It has been a silent time in blog-land. Sorry about that, but I’ve always taken the view that blogging/social networking has to take second place to the obligations of client representation. How can one justify musing and pontificating in cyberspace when a client’s waiting for editorial notes or progress on their deal? Doesn’t seem right to me. But hey, I’ve missed the musing and pontificating,so Sarah the Blogger is back in town!
What have we been up to? 2011 has begun at a cracking pace and Julia and I are really excited about how the agency’s developing as it enters its third year (ONLY THREE YEARS!? I hear you say. HAVEN’T THOSE PEOPLE BEEN AROUND FOREVER???) Yes, it’s coming up to three years in March that Greenhouse did its very first deal, for Sarwat Chadda’s DEVIL’S KISS, and now the green shoots can be seen all over the place. Not least for Sarwat himself as we’ve just announced the sale to HarperCollins – at auction – of UK/Commonwealth rights in his epic new Indian adventure series, THE ASH MISTRY CHRONICLES, mixing a contemporary Indian setting with the vast mythology of that great country which, as far as we know, has never been done in children’s fiction before. Think Percy Jackson meets Indiana Jones on the Indian sub-continent! And good news about North American rights is on the horizon . . .

Another storming piece of news is that one of my favourite authors has just joined the Greenhouse and we are very honoured to have her with us.

Scotland-based Julie Bertagna is the author of a number of books for children and Young Adults, in particular her award-winning, critically acclaimed EXODUS trilogy (see the jacket image), published by Macmillan in the UK and Walker in the USA. The third book, AURORA, publishes in the UK this coming June.

As well as being far ahead of the pack in writing a dystopian epic – years before anyone else thought it was remotely cool or interesting – in this trilogy Julie has crafted three beautifully written, heart-wrenching stories of courage, adventure and survival, so if you haven’t read them go and do so forthwith! As well as being shortlisted for the prestigious Whitbread Award (now the Costa), EXODUS achieved a slew of shortlistings and some stellar reviews. How’s this one from the Guardian: ‘A miracle of a novel . . . a book you will remember for the rest of your life’. Click through this link to see lots more reviews. http://www.juliebertagna.com/start.html. We can’t wait to see where Julie goes from here and are thrilled to join her on this new phase of her journey.

We continue to love discovering new debut authors (and are receiving record numbers of submissions), but it’s also very exciting to see existing clients starting to build a track record and achieve new deals for the future.

In the past week Tricia Springstubb (author of multi-star-reviewed WHAT HAPPENED ON FOX STREET) has confirmed a new 2-book deal with Candlewick – publishers of her younger work – for a sweet, funny, wise young chapter-book series provisionally titled CODY. And Anne-Marie Conway (author of STARMAKERS series about a drama club) has achieved a second deal with Usborne for an intriguing new standalone novel, BUTTERFLY SUMMER.

Outside my window the weather is balmy and we’re temporarily thinking SPRINGTIME! And springtime means one very big event – the Bologna Book Fair, happening in Italy at the end of March. A lot of prep goes into Bologna, and Julia and I have been very busy sorting out our back-to-back schedule of appointments, where for three solid days we network, pitch and tantalize UK, US and European publishers with our feast of wares – both existing clients and, very importantly, new work just coming on to our map. This is the place where scouts, editors, film people – and everyone and anyone with an interest in the children’s/YA books industry around the world – gathers to see what’s coming up that might be hot. Julia and I have a lot of visitors coming to our humble table this year, and that makes us very happy. These people don’t waste their time – we don’t only want Greenhouse to be hot, we want to be the hottest of the hot! 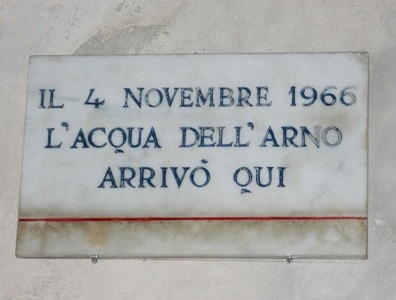 Oh, and did I also mention that Bologna is one of the great gastronomic capitals of Italy (if not the world)? Did I mention the prosecco? The midnight walks over medieval cobblestones in unsuitable heels? The heady overload of talking, air-kissing, pasta, ancient beauty, Blackberry-checking? The falling into bed much too late/early only to lie there with head spinning as the sounds and light of Italy filter through the shutters? Every year the Bologna Book Fair refreshes and reinvigorates our vision of this extraordinary international business.

It also reminds us very forcibly of the value of a great pitch to your work. I wish you could watch as Julia and I start each appointment because you would learn some interesting things about fiction and the marketplace.

An editor – usually very senior, since only senior people get to travel – sits down opposite us. We exchange greetings, catch up on news, and then we dive in. As we pitch a story we watch – close up – as the editor reacts. We see the eyes light up – or close down. We see the surreptitious glance at the watch under the table (time to move on), the distracted flick of the eyes (boring), the barely concealed snort (we’ve been pitched an identical story 10 times today already) – but also the great moment when our visitor laughs and sits up taller or leans across the table and scribbles notes.

This, my friends, is where the pedal is put to the metal! While stories are obviously so much about the writing, the fact is a unique pitch, a fresh concept, a great title are crucial in grabbing the attention of these inundated industry professionals. The Bologna experience is an intensifying of the process we go through all the time as we select, hone and then present your work to the trade. It’s got to have a Unique Selling Point, a hook – as well as the quality of writing to support all that.

Three years on, the Greenhouse is blooming – and we’re thrilled to be off to Italy next month for the greatest show in town. And we’ll tell you more about that after the fair.

Meanwhile, take care and enjoy those first buds of spring if they’re springing anywhere near you! 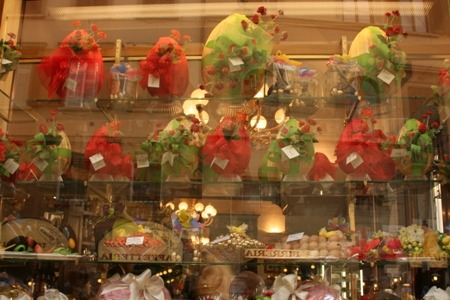 Pix: 1) Macmillan UK’s stunning rejacket of Julie Bertagna’s EXODUS 2) marking the height of flood waters in Florence, Italy (or possibly an apt comment on the level of Greenhouse submissions) 3) The fanciest Easter eggs you ever will see, Florence