My Life in the Spotlight: Part 2

It’s taken me more than two and half years to return to this theme – first visited in My Life in the Spotlight: Part 1, posted on October 11, 2008. Sadly, because of the way this blog is set up, I can’t directly link to the earlier post, but you can find it easily via the Archives in the left margin. Perhaps you’d like to read it first, so you can see my context here.
Every now and then, usually at a conference, someone will ask me a question – one so terrible, so provocative, so heartfelt that it can barely be articulated. I can tell it’s coming because of the emotion and anxiety in the individual’s face as they approach me. Gently, I will guide them to a quiet spot behind the coffee urn or to a remote seat in the lobby, because this is not a discussion to be had amid crowds of laughing, chatting attendees.

The devastating question is this: HOW DO I KNOW IF IT IS TIME TO GIVE UP?

That’s right – give up. And I don’t mean, ‘When is it time to abandon one manuscript and move on to another?’ I mean GIVE UP WRITING FICTION, GIVE UP TRYING TO GET PUBLISHED, GO AND DO SOMETHING ELSE ENTIRELY WITH MY LIFE.

I know, it’s huge, isn’t it. And such a travesty of all we believe (we write because we must, we keep trying because determination is key, didn’t J.K.Rowling get rejected innumerable times?) that any answer is like rushing in where angels fear to tread.

But I don’t believe in taboo subjects, so I am going to offer you a story, which is my way of answering the unanswerable.

It’s the 1990s, my kids are young, but I’ve been pursuing the dream for a while now – song-writing and singing, both alone and with my band. It’s a struggle doing this with a family, but I knew I had to try – to see how far I could get, because performing is what I DO, because it’s the ultimate self-expression, the ultimate adrenaline rush. Because it’s who I AM.

The wives of the band guys are getting antsy. Their husbands have got day jobs and kids too, and they don’t have as much at stake as me – or as much patience with ferrying equipment around London at midnight on a Wednesday, only to perform to a bunch of inebriated people propping up a seedy bar.

My standards and goals have risen too. We’re getting gigs, but I yearn to be better, to find a whole new level. It’s the dissatisfaction with oneself that is so hard to take.

One night, down at the Mean Fiddler Acoustic Room (where so many bands and singers have debuted), I get talking to a guy who’s got the set after me. He’s there alone with his guitar and he’s got no audience. I’m really happy all my people (lots of them) will be hanging around to hear him because it’s a bleak place alone.

I come off stage and wind down, listening to him. His voice is strange and memorable, his songs are plaintive – getting drunk on a Saturday night, losing your girl – and he’s just a guy in a scruffy grey jacket and jeans, alone with his guitar. Afterwards everyone agrees, I was better than him, and I smile bashfully because it’s probably true.

Back home, getting children ready for school, doing freelance editorial work, my dissatisfaction with my music grows. I’ve got other things on my mind – I need to make some money, I need to get serious, I need to invest my limited time wisely. And most crucially, I’m just not as good musically as I want to be.

Gradually, I drop back. I don’t even return the call when The Borderline leaves a message offering me a gig, though I’ve wanted that invitation for ages.

It hurts like hell, but it’s over. Who am I now? 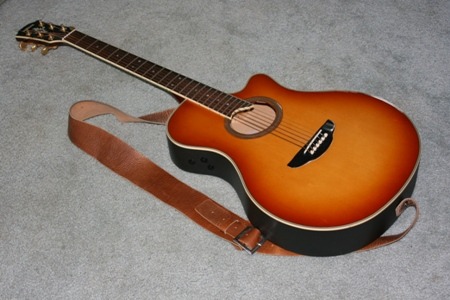 Maybe a year later, I’m in the kitchen doing the dishes, radio playing in the background. Suddenly, I am transfixed. It’s a voice I know – a strange, wailing, painful voice that I’ve heard before but can’t place. My heart is racing because this MEANS something important – but what?

And then I realize. It’s the voice of David Gray, the guy I shared an evening, a venue, with. The guy who had no audience so ‘borrowed’ mine. The guy I was widely thought to be better than. He’s sounding amazing and he’s singing a song called ‘Babylon’. You can catch a few bars of it here: http://www.davidgray.com/music/discography/DG_AlbumDetails.aspx?albumid=14760f81-ede0-461c-910a-e9f95edaee36&Cat=Albums

I’m not jealous – I’m amazed, dumbfounded. I laugh out loud. I’m lost in wonder that this can happen. A guy I knew in a beer-stained bar is hitting the big time.

And now David Gray becomes ‘my guy’ – whose progress I will follow obsessively over the months, as his iconic album WHITE LADDER becomes one of the biggest global sellers of the decade; as ‘Babylon’, ‘My oh my’ and ‘Sail Away’ become soundtracks of their generation, piped into every supermarket and airport in the UK and US.

The ironies and the truths are not lost on me and I quietly thought them through that day in my kitchen.

I turned away from music and back to publishing, rapidly ascending through the years and ranks to Publishing Director, and then of course over to the US to create the Greenhouse, which is the crowning achievement of my literary life. I truly found my vocation, doing what I do best. I am a far better editor and literary agent than I was musician, and I derive great satisfaction from working with writers and helping them to achieve their dreams.

David Gray continued with music, after I stopped. He went on to become an international superstar, from the grassroots up – the old-fashioned way. Managing on little money for years, he fought through huge obstacles to find his sound, his audience. I have the utmost respect for him, and will always feel a connection.

*********
And so, I return to that troubled questioner at the conference, who’s laboured for years without reaching their goal. HOW DO I KNOW IF IT IS TIME TO GIVE UP?

Sarah Davies gave up trying to make it as a singer-songwriter and found reinvention, success and fulfillment – in her true vocation.

David Gray stuck with music through the lean times and setbacks, eventually bursting through to unimagined international success – in his true vocation.

Vocation is an old-time word, but one I love. I commend it to you now – because it is the only answer I can give to the answerable question.

Wishing you all a very, very happy 4th of July.