The story of August (Chapter 1)

If, as T.S. Eliot says, ‘April is the cruelest month’, what does that make August? The month when you’re incredibly busy but think you shouldn’t be because it’s supposed to be vacation time? (In fact, as I write, Julia is away in a Nordic country doing something unusual involving fish – all in the name of relaxation.)
Some agencies seem to wind down a notch this time of year – closing to submissions, waiting to submit mauscripts to editors till after Labor Day. We don’t really do either. We can’t bear miss a great submission, and editors get so inundated in September. Presuming the crucial people are around, I prefer to get on with stuff NOW!

So August has been hectic – and I want to tell you some of the month’s highlights. All things that will tell you something useful about the Greenhouse.

1 We get out and about (a lot) – and we really enjoy meeting writers and industry people.

I was in LA during the SCBWI National Conference. Not on Faculty this year, but with 1300 writers in town, it’s a great time to see West Coast clients, our co-agents for film/TV (particularly Jerry Kalajian of IPG, Jon Cassir of CAA, Jason Dravis of Monteiro Rose Dravis) , and editors. Oh, and scouts like Riley Ellis who is always on the lookout for potential film properties for Disney. Great networking gets done on that sunny patio!

We do try to foster an atmosphere of friendliness and mutual support among our authors, so it was wonderful to have a Greenhouse dinner for our US clients in town that week. Such a great evening, and the pic at the top of this post gives an idea of the fun we had.
From left to right: Elle Cosimano, me, Annemarie O’Brien, Lindsey Leavitt, Amanda Conran, Sue Cowing, Erica Scheidt, Talia Vance, Donna Cooner, Catherine Linka.

I also want to highlight those delightful people the YA Muses, with whom I chilled in LA. Greenhouse reps two Muses, but they’re all great people. Between them, they’ve sold a total of eleven, yes ELEVEN books in the last year – incredible for a group of debut authors! How did they do it? What have they learned along the way? What a mine of information! If you haven’t already, check out their blog http://yamuses.blogspot.com/ 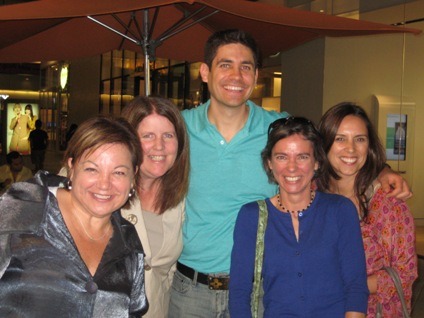 And Julia? Her August trip was to the Arvon Centre in Hebden Bridge, Yorkshire (an awful lot more bracing, and probably damp, than LA), the former home of poet Ted Hughes, where she spent a weekend sharing agently wisdom with new writers. http://www.arvonfoundation.org/p93.html

2 We did our first TV rights deal

It’s not easy – especially now – doing deals for film or TV. It’s not even easy bagging an LA-based co-agent who loves your story enough to jump in and present your work to the studios. It has to pop, it has to have visual potential, it has to be unique, and even then . . . So while we are constantly approached by production companies wanting to read newly sold manuscripts, turning that into an option deal means a LOT of hoops must be jumped through by a lot of people, often over a longish period of time.

So we’re really excited to have reached signed contract with Gaumont International for Sarwat Chadda’s DEVIL’S KISS and DARK GODDESS novels (with Gale Anne Hurd of WALKING DEAD/TERMINATOR attached as producer). Fingers crossed for where this goes next!

3 We love representing and selling unique work, whether by already published authors or debuts

We’ve done two deals this month which show that!

I’d had my eye on Blythe Woolston ever since I heard her read a few pages from her new manuscript –BLACK HELICOPTERS – at SCBWI Montana last September. Which shows the value of conferences! She joined Greenhouse in July, and within a couple of weeks she had a six-figure, two-book preemptive offer from Candlewick.

Blythe won the prestigious William C Morris Award at ALA Mid-Winter for her debut novel THE FREAK OBSERVER (Carolrhoda LAB), so why so much excitement about this new deal?

We all know publishers can jump for big, dark novels – paranormal, thrillers, dystopia, but BLACK HELICOPTERS is a bit different. Yes, it’s a psychological thriller, about a girl raised from birth to be a conscienceless killer, who sets off in a bomb belt to kill and be killed – until her plan goes explosively wrong. But the story is told with sophistication, non-sequentially, so the reader must piece together the timeline of events. Also, it’s less than 35,000 words in length. In other words, there are several elements that don’t sound obviously ‘commercial’ – yet the story has intense impact. It’s caused a stir because it is surprising, different, very clever, and every word counts.

Julia also made a great sale in August. EDEN, by Helen Douglas, is a YA novel that brings together a love triangle, time travel, and space. The clever aspect here is how time is used in the story. We’re used to plots set in the future, but EDEN brings a boy from the future back to the present day in order to stop a planet being discovered – in the future – that will spell the end of Earth and humanity. Very clever! Again, a publisher leapt for it and Julia sold World English rights to Bloomsbury US and UK in a simultaneous preempt.

So, if you’re tempted to write something you think ‘everyone is buying’, just remember – we are looking for work that is surprising, original, and ambitious. In fact, something that no one else at all is writing!

4 We love doing deals both sides of the Atlantic

Yes, we love our international roots and working our special transatlantic identity – and we’ve had a lot of success at it. Exploiting rights in our authors’ work to the max, is something that gives us so much satisfaction. Latest example? In August I tied up a second UK/Commonwealth deal with Simon & Schuster for Brenna Yovanoff’s PAPER VALENTINE, which I sold first in a 2-book deal to Razorbill in the USA a few weeks ago. Great to keep developing Brenna’s publishing relationships throughout the English-speaking world (and of course beyond, in translation).

Hurrah (rubs hands in glee), I have just taken on a new author who appeared in our submissions inbox a few weeks ago. I never like to say too much about that till we’re further down the tracks, but I can tell you that she’s very talented and has a very exciting story to tell – I guess you could call it a romantic thriller, featuring a girl with way too many secrets and in way too much danger . . . And after that very vague statement, my mouth is zipped.

6 We work nearly all the time, but not quite

We’re only human. We love the summer. We love to be outside – walking, swimming, boating, and doing things with dogs. Here, to finish, is a summer picture – Dachsund bath time!

So that was just a small part of our August. How about yours? 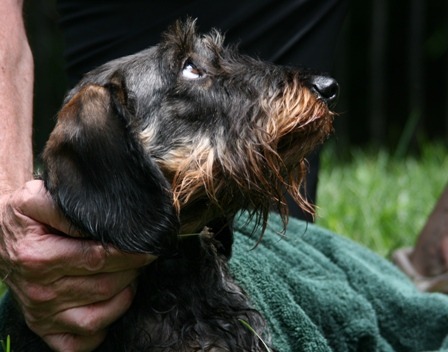