The (Literary) Spirit of Normandy

The schools are back, the traffic’s a nightmare, yesterday I wore my first pair of ‘proper’ shoes since May, and it’s pouring outside as I write this.
Yes, it’s Fall! And yet my head is still partly in Normandy – northern France – where I spent time this summer. It’s an area I love and which really inspires me as I think of all the excitements and challenges ahead in the run-up to the end of the year. Maybe it could inspire you too!

What do I love about Normandy? It’s very pretty, parts are very quaint and picturesque, but it is so much more than that – because history has steeped the fields, the beaches, the villages and the cities with huge significance.

William the Conqueror set off from Barfleur to seize the throne of England – which he believed he’d been promised – and ending up reshaping the Middle Ages. The pic at the top shows where he left from!

Hundreds of years later, in June 1944, the Normandy coastline was the surprise (to the enemy, at least) venue for the beginning of what turned into the invasion of Europe. From Sword, June and Gold, up to Omaha and Utah beaches, thousands and thousands of Brits, Americans and Canadians (and other Allied forces) poured ashore, risking their lives in bloody battles. On Omaha Beach alone, thousands of US soldiers died, cut down by the guns ravaging them from the cliffs. You saw a fair approximation of the carnage in those opening scenes of Saving Private Ryan.

St-Mere-Eglise, the 101st Airborne, Carentan, Caen . . . the names are iconic. How can all these incredible events have taken place in such a demure and charming area?

I love Normandy because it reminds me of what is possible. What you can achieve with courage, determination, flexibility – and a large amount of grit. I try to start work every day in that spirit, focusing on the positive that lies ahead and prepared to bounce back from the knocks. 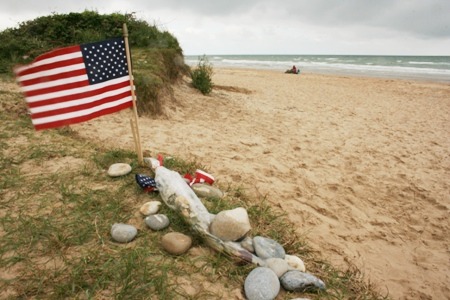 If you are a writer, you can easily be thrown off course by the turbulent seas, the huge guns, that seem at times to be arrayed against you. Who are YOU to try to find your niche in this industry; what can make YOU stand out and achieve your dreams?

Here are some of the discoveries I make in the quiet lanes of Normandy.

The importance of preparation

We see tons of submissions from folks who think writing is easy – something that can be knocked out at high speed. If you are reading this blog, you are not one of those people! But remind yourself again – writing is tough, it’s a skill to be learned, a craft to be mastered. We love those writers who inch ever closer, who make it their business to find out where they went wrong before – who treat it like a serious profession in which they are apprentices.

Did the invasion of Europe happen without preparation? Need I even answer that question?! It was costly, it was scary, and it was complicated.

The importance of courage

You get knocked down – then climb back up. Stagger to your feet, look around you, assess the damage, plug the holes in the boat and fix your guns that don’t fire any more. Fortunately, as a writer you should still be alive at this point, and where there’s life there’s hope and another day.

Maybe your masterplan needs some rethinking. Maybe you won’t get that book deal this year – but it might be next, once you’ve found yourself that solid critique group, that mentoring; taken on board those nuggets of wisdom an editor gave you in passing or the lines of unexpected advice an agent proffered. If you are too defensive you may never let yourself hear the words you really need to heed – but heeding them can require a lot of nerve.

Don’t be put off. Do you have cajones? Yes you do!

Did William the Conq say, ‘I don’t think I can do this – those English lords might get a little grumpy?’ As if!

The importance of flexibility

I’m a great believer in bending with the wind. If one plan doesn’t work, rethink and try another. If your manuscript isn’t working out in one shape, consider unpicking it and starting again from a different perspective, in a different tense etc. With a clean sheet before you, you might suddenly have a lightbulb moment.

Tired of bombarding agents with submissions that don’t go anywhere? How about signing up for a writing course that will stretch you, a conference you’ve never dared to try before, experimenting with voice . . . .

Might you approach the problem from a different angle? You’ve tried Plans A and B – so how about C? And that could apply to everything from querying to working out plot structure or character.

Was there only one way to take back France? Sure, there was one big goal, but an infinite number of ways of achieving that goal.

The importance of determination

It is very often true that if you want something enough, and you’re prepared to work for it, then you will get there in the end. Of course there are exceptions, but it’s a good philosophy to bear in mind.

Determination encompasses everything else – preparation, courage and flexibility. With a large dollop of hard work on top. Also, quite simply, it’s an act of the will not to be defeated.

For a writer that doesn’t necessarily mean blindly firing stuff out there, refusing to take No for an answer. That can get kind of sterile. Rather, I believe it’s an acknowledgement of the learning process – a determination to improve, to be good, to be better than last time, even while understanding that the goalposts become higher the better we get.

Did William, Duke of Normandy, face the ocean and say, ‘I think I’ll go home now for a cup of tea, those waters look a little choppy?’ If he had done, he’d never have earned the name Conqueror.

And much more seriously, was the invasion of Europe called off because of its terrible price?

Please don’t think me facetious – we aren’t talking about issues of the same scale. Obviously. I’m just saying if something is really important to you, you’ve got to fight for it.

There’s one more thing to understand about Normandy. You can eat the most fantastic fish and seafood. Barfleur, which once hosted William the Conqueror (before he WAS a conqueror) is a fishing village. And fishing is something we agents – and you authors – can relate to.

Keep going this Fall. Do the work, keep learning, stay focused and brave. Speak determined and inspiring words to yourself.

And then let’s go fishing – with the spirit of Normandy in mind.

Pix: 1) Barfleur: where William set off to become a Conqueror; 2) Omaha Beach – may the thousands rest in peace; 3) Crab fishing – Barfleur again.