The things I love about Adele

There are a few ways in which the singer Adele and I are similar.
We both come from the London area.
We both like to sing.
We are both female.

There are more ways in which we are not similar.

She won 6 Grammys the other night.
She is currently one of the most feted singers in the world.
She has big hair.
And she is 23.

There are many things I admire about Adele.

Her voice is a powerhouse.
She refuses to work with people who tell her she should look different to how she does.
She’s come back from throat surgery.

But the thing I like most about her is that she just sings. She gets up (or sits down), she wears a simple dress, she looks gorgeous, and . . . . . she just belts it out. No revealing clothes, no pyrotechnics, no dancing, no weird stuff.

She just sings. Better than almost anyone you can think of.

It’s all about her voice. Her great lyrics. Her emotion. That golden instrument. 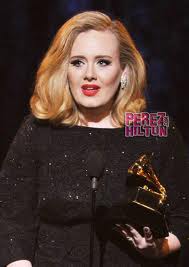 I love writing like that. Spare, spotlit, devastating.
A powerful song sung on an empty stage so that the reader almost holds their breath.

I’m not saying it’s easy, forming any work of art like that. But that sense of stillness, of control, are surely something for which to aim amid the multitudes of distractions. Finding one’s own voice, learning how to use it, letting the language speak powerfully and authentically and simply into the silence.

Want to know what I mean? Here is Adele, singing SOMEONE LIKE YOU. http://www.youtube.com/watch?v=qemWRToNYJY

Thank you, Adele, for being someone like us, and for doing it so incredibly well.