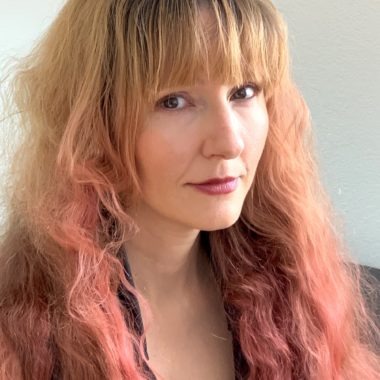 Brenna Yovanoff is the author of several highly regarded novels for young adults, including New York Times bestselling THE REPLACEMENT. She lives in Colorado.

Brenna Yovanoff has written a number of novels for teens (published by Razorbill and Delacorte) and holds an MFA in Fiction from Colorado State University. Her latest novel – THE PLACES NO ONE KNOWS – has received several accolades, and her debut – THE REPLACEMENT – hit the NYT bestseller list. 2019 has seen publication of  Brenna’s RUNAWAY MAX, the first YA novel set in the world of Stranger Things, the hit Netflix series.

For a long time she wrote short fiction with Maggie Stiefvater and Tessa Gratton, who together comprised the Merry Sisters of Fate.

She lives with her family in Denver, Colorado.

The Anatomy of Curiosity

Following the success of THE CURIOSITIES, three new stories – complete with commentary on the creative process – from three acclaimed young-adult authors working at the height of their powers.

Places No One Knows

A high-achieving girl falls for the most imperfect boy in school through a series of mysterious dreams, which change how she feels about herself, her future, and love.

Dark and strange, surprising yet always beautiful, a stunning new novel from NYT-bestselling Brenna Yovanoff, author of THE REPLACEMENT and THE SPACE BETWEEN.

The Curiosities- A Collection of Stories

NYT bestselling author of SHIVER Maggie Stiefvater, Brenna Yovanoff and Tessa Gratton’s collection of stories – as well as conversations about where these stories come from – taken from their popular blog The Merry Sisters of Fate (http://community.livejournal.com/merry_fates).

Elegantly strange, darkly compelling, this truly original debut novel marks the arrival of a major new talent. It features a brooding, bass-playing teen boy who is sure to resonate with all young-adult readers.

I started writing regularly when I was about eleven. Admittedly, it wasn't very good, but I had a massive collection of spiral-bound notebooks, and as my little sister can testify, I was very protective of them. As I got older, I learned about the miracle of document files, which made editing and revision much easier and improved my productivity tremendously.

The first book that really made an impression on me was Roald Dahl's THE TWITS. It was the first book I ever picked out myself and the first one I bought with my own money. Looking back, it was a pretty strange choice, considering I was four years old and the cover was a very unenticing brown. I think I originally picked it because I was fascinated by Quentin Blake's illustrations, but the story was so enthralling and weird that I had to read it over and over.

The first key moment was when I got the idea for THE REPLACEMENT. I started thinking about what it would be like if someone were a changeling in a town where that kind of thing was an open secret, and what life would be like, and the character of Mackie Doyle grew out of that. The story has undergone some pretty significant changes since I started, and one of the key moments was when Sarah called me after I'd submitted to her and basically said that the world needed to be fleshed out and the ending made no sense, so would I please do something about that, which changed the book entirely, and very much for the better.

Was it hard to get an agent ? Can you talk us through the process?

Well, I was a slush-pile girl, so I can testify that it really does happen. I did expect finding an agent to be difficult, so I wanted to be prepared. I did a lot of research in preparation. I looked at websites and read interviews, then sent queries to agents who seemed likely to be a good fit, not only for what I had written, but for what I knew I wanted to write in the future. Once I started querying, the actual process went pretty quickly, but I did spend a long time beforehand doing research and going over my letter.

I'm a morning writer by necessity. I used to be a nighttime person, but I've finally accepted that if I don't work in the morning, I never get to see my family or my friends. I find that in order to organize my time well, I have to be very strict with myself and set specific blocks of time or word-count goals - otherwise I don't get as much done as I would like. I love writing in coffee shops, because I'm one of those people who always needs a little bit of background noise in order to concentrate.

Read. That's the biggest piece of advice I have, and I think it's something most aspiring writers are very good about. After all, a lot of people are drawn to writing because they really, really like books. However, I'd go even further and say, read outside your chosen genre, outside your areas of interest. Read things you don't expect to like, or that you've never heard of. Also, this probably goes without saying, but write. A lot.

Plotting, plotting, and plotting. Just kidding (but not really). There are so many elements of craft that are crucial to telling a good story, but plotting is the one that's given me the most grief and the one I absolutely had to get a handle on before I was ever going to be successful at telling a story. You can always get better at craft, and I continue to refine my skills every time I sit down to write, but plotting has been so important - it's the foundation that all the other elements rest on.

I'd love to have Neil Gaiman over. He seems like he'd be soft-spoken and charming, with lots of interesting anecdotes. As far as characters go, I absolutely covet Donna Tartt's - especially Charles and Camilla from THE SECRET HISTORY, and the entire cast of the THE LITTLE FRIEND.