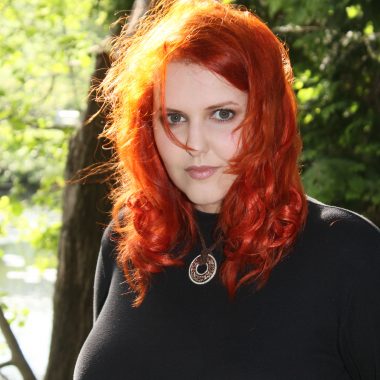 Dawn Kurtagich is a writer of creepy, spooky and psychologically sinister YA fiction. She lives in the evocative and mountainous landscape of Wales.

By the time she was eighteen, Dawn had been to fifteen schools across two continents. The daughter of a British globe-trotter and single mother, she grew up all over the place, but her formative years were spent in Africa–on a mission, in the bush, in the city and in the desert.

In her literary life, Dawn is drawn to the dark and the inexplicable. Her debut YA horror/suspense novel, THE DEAD HOUSE, received huge interest from publishers on both sides of the Atlantic, eventually being sold to the transatlantic Hachette group.  Her second novel has two titles – AND THE TREES CREPT IN in the USA, and CREEPER MAN in the UK – reflecting the cross-Atlantic appeal of Dawn’s fiction.

Teeth in the Mist

A genre-bending epic horror-fantasy, inspired by the legend of Faust, that spans generations as an ancient evil is uncovered–perfect for fans of Kendare Blake and Ransom Riggs.

A second, chilling YA novel from the mistress of psychological horror.

Debut author Dawn Kurtagich is dead on in this terrifying psychological thriller!

I was twelve when my mother brought a leather-bound notebook home to me from Boston. It was the most beautiful book I had ever seen. I wrote my very first novel in it (in pencil, because I was worried about ruining the beautiful pages!). That was the beginning of a long obsession with novels and notebooks.

I wasn’t born a natural reader. But I loved stories. In nursery school, our teacher read Roald Dahl’s JAMES AND THE GIANT PEACH, and I was mesmerized. But without my mother asking (begging) me to read to her, my life today would be very different. One day when I was 11 or so, she brought home ANIMORPHS (in which a group of kids are given the ability to morph into animals by a dying alien!) by K.A Applegate and the rest is history.

THE DEAD HOUSE was born out of illness and a need for catharsis on my part. When I was very sick in 2012, I experienced what’s called “inversion syndrome”, wherein I slept during the day and was awake all night. My life became nothing but a series of long nights, and it dawned on me that someone who had only ever known the night would have a pretty interesting story to tell. And if there was a dark half of the equation, there had to be a light part too, and so my main character(s?) were born. And so was the house.

I was very lucky this time round. Excluding the time taken to perfect my letter, my manuscript and my pitch, my query journey was quite short—five weeks in all—and I had multiple offers of representation. The hard part was making a decision!

I like to write all over my house. Some days, the lounge. Some days, my study. Other days, in bed! I write best in the evening, I think, and the early hours after midnight (whether I’m getting up early or staying up late). Inspiration comes from everywhere. The weather, nature, music, books, films, myths, legends, history—every experience and sensation gives something back. I can be pretty haphazard and unpredictable, but it works for me.

Keep writing and never stop. Learn your craft, and learn from the books you read. Never think you are done. Keep learning. Don’t let criticism be a rock on your back—let it be the buoy underneath you. Take advice from people who you admire, and who have it made, but chuck it out the window if it doesn’t work for you. Every writer finds their way by feeling around, trying different things, and keeping what works. There is no one right way. Learn that.

1. Bravery. Not allowing fear to dictate how I write. To be brave in the words I use, and the stories I choose to tell. Allowing the darker side of the story to unfold naturally and authentically, rather than suppressing it because of what might or might not be considered “safe” or “acceptable”. Kids are brilliantly resourceful, wily and smart, and I have learned not to underestimate them.
2. Time. Learning to step back and allow the work to take the time it needs. Turning a book out monthly might be impressive, but what quality of story and writing is it really bound to be? Tied to this is giving yourself time to learn to write. Read books that do it well. Find out why. Break them down and notice the mechanics.
3. Writer Crazies. They happen. It’s okay. Have friends (and an agent) that understand this (it is invaluable when you think the universe is coming to an end).

Hm . . . what would be the most fun? Roald Dahl might be a laugh. He’d bring the giant peach we would both dine in and dine on. Juliet Marillier, because she is a beautiful writer, and would entertain us with fables a la Conor of the druids. Courtney Summers (in case of zombies). Mickey Zucker Reichert and Jennifer Wingert, because they’d help us all have spirit links to cool animals. Gillian Flynn for when things got dicey, and to top it off, J.K Rowling, who would bring the sorting hat.