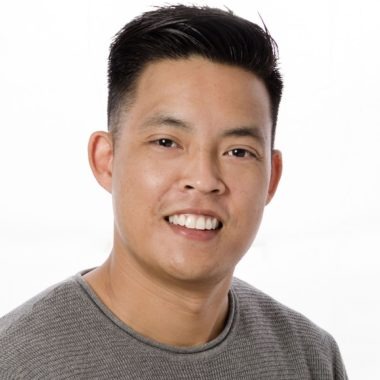 Gavin Aung Than is the New York Times bestselling comic book artist of ZEN PENCILS, which is based on his webcomic adaptations of inspirational quotes into comic stories. His work has been featured by The Washington Post, The Huffington Post, Slate, and Buzzfeed. His award-winning Super Sidekicks series series for children is out in the US, UK, and Australia. He lives with his wife and daughters in Perth, Australia.

Visit aungthan.com to find out more and follow him at @zenpencils.

When and how did you start writing?
I've been writing and drawing my own comics seriously since college. My first job out of college was as a graphic designer at a newspaper. I managed to get my own comic strip published there where I wrote and drew my strip every week for five years. I also did another strip for three years. So that was really my comics apprenticeship, building the reps necessary for my work to level up to a professional standard. Writing has always been a way for me to DRAW my own ideas. I'm definitely more comfortable with art and cartooning, I find writing and the dialogue much more of a struggle.

Can you remember the first book that made an impact on you? Who were your childhood storytelling heroes?
Since I'm a cartoonist, I will stick to comics and animation. I loved MAD magazine as a kid. The irreverent humor and beautiful artwork got me hooked on cartooning. Next were the European icons Asterix and Tintin. Again, I got caught up in the amazing art. My three biggest cartooning influences are Jack Kirby, who created the Marvel Universe with Stan Lee. The Looney Tunes master Chuck Jones and Calvin and Hobbes creator Bill Watterson. In fact, I've made ZEN PENCILS tribute comics to all three of them! Links included. :)

Can you talk us through your career so far? What were the key moments?
Wow, okay. Let me see. Like I said, my 20s were spent in the corporate graphic design world. I had over 500 comic strips published in local newspapers during that time, all done in my spare time. Key moment 1: I decided to quit my design job and launch Zen Pencils in 2012, a webcomic that adapted famous inspirational quotes into comics. I was miserable in my old job and finally plucked up the courage to attempt to pursue my dream career as a cartoonist. It was the best decision I've ever made, and I've been surviving as a full-time cartoonist ever since. Key moment 2: In 2013, I got my first book deal, collecting my online Zen Pencils comics into a book. I worked full-time on ZEN PENCILS for over six years with the comics being collected into a total of four books. Key moment 3: I decided to retire Zen Pencils and focus on children's 'graphic novels' (a term that I dislike, they're COMICS!) in 2018, and in 2019, my series Super Sidekicks was released in Australia. Key moment 4: The Super Sidekicks series was bought by Random House Children's Books in the US and released stateside in November 2020.

Describe your writing day. Where do you write? How do you organize your time? Where do you look for inspiration?
I find a consistent routine key to being a successful cartoonist, especially when working from home like I do. I usually work from 9am–2:30pm, which is when it's time to pick up my daughter from school. I might be able to squeeze in another hour of work before dinner and then another hour or two at night when the kids are asleep. We've got a little baby girl at the moment, so my consistent and steady routine has been turned upside down! I have a home office where I do all my work. I walk my dogs every morning without any music or podcasts to just try and think of ideas and let my mind wander creatively.

Are there any tips you could give aspiring writers who are looking to get published?
Well I'll share how I first got published. I had gained some attention with my Zen Pencils website with some of the comics going viral. I made a comic tribute to film critic Roger Ebert after he died and his book editor saw it and reached out to me. She worked at Andrews McMeel Publishing, a big-time comics publisher and after some back and forth emailing, they agreed to publish a Zen Pencils book. So if you're an aspiring illustrator or cartoonist, you do need to have an online presence. Instagram would be the main platform these days where illustrators get discovered. I hate saying this, but publishers do look at how many followers you have. A big following helps but isn't a must. Once you have a great showcase for your work I recommend reaching out to agents (like the ones at Greenhouse!) to ask if they see any potential in your work and possibly taking you on as a client. Finding the right agent is also important, someone who believes in what you do, can help nurture your talent and steer you into what the market is looking for. Rejection and setbacks are a given, just don't let them beat you into giving up!

Can you describe three aspects of writing craft that have been most important as you’ve developed as an author?
I've made an entire comic featuring my best tips on how to be more creative. Not so much craft stuff, but I think writers and illustrators can relate.

Which favorite authors would you invite to a dinner party? What fictional character do you wish you’d invented?
Hunter S. Thompson would be fun, although the hangover the following morning would be brutal. His illustrator partner Ralph Steadman would also have a lot of good stories to tell. Neil Gaiman, mainly because his English accent is so comforting. And comics master scribe Alan Moore. Not only is he a wealth of knowledge on all things comics and writing, he's also a practicing magician who worships a snake god! Fun times. This might be cheesy, but Spider-Man is a character I wished I invented. The nerdy teenager who gets superpowers but his own selfishness leads to his beloved uncle getting killed. Genius! And that costume, designed by eccentric recluse Steve Ditko, is the best superhero costume ever.