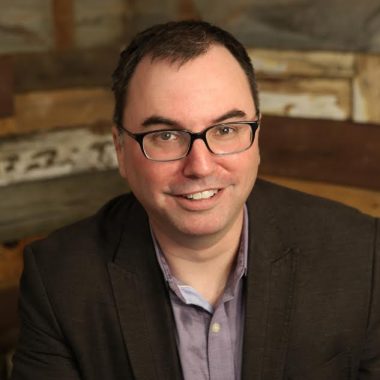 George's MG fantasy adventures are delicious romps of wit and imagination. He also writes adult fantasy fiction and lives in South Carolina with his family.

Four days a week, George writes middle-grade and adult fantasy fiction, having been published most recently in an anthology titled Dark Magic: Witches, Hackers and Robots. The other three days he is a respiratory therapist at a hospital in Charleston, SC. He lives with his wife and baby daughter in Folly Beach, SC. You can find him online at www.georgebrewington.com and @7brewington7.

Quirky, funny, and bursting with imagination, a fantasy adventure with heart – and the best monsters in town!

When and how did you start writing?
I started writing stories way back in first grade on my father's Underwood typewriter. The old Underwood was equipped with a red ribbon and a black ribbon. I typed in red for dialogue and black for description so the reader wouldn't be confused. Darth Vader and Luke Skywalker were my favorite characters to borrow for stories which often took place on the dreaded PLANET X. It did not occur to me to create my own characters until my father suggested I do so.

Can you remember the first book that made an impact on you? Who were your childhood storytelling heroes?
Lloyd Alexander's CHRONICLES OF PRYDAIN was the first fantasy series I read and I was hooked. I moved on to Tolkien, LeGuin, the Dragonlance novels, and whatever else I found at the library. Douglas Adams' HITCHHIKER'S GUIDE TO THE GALAXY still makes me laugh and I think the humor in my stories stems from that series.

Can you talk us through the writing of your first book? What were the key moments?
BUCKLEBY AND SON'S VERY STRANGE SOUVENIRS is not the first book I've written, but it's the first where I let myself write the wacky story I always wanted to write. I've written two other books, but they were vain attempts to be literary or profound. With Buckleby, I sat down to just write the funny adventure I wanted to without an audience in mind. Not surprisingly, the writing is more authentically me and the characters (I think) are more relatable.

Was it hard to get an agent? Can you talk us through the process?
I was very fortunate to hire Julie Scheina to edit my novel. She suggested emailing it to Sarah Davies who - to my great fortune - loved it and sold it. However, before I met Sarah, I went to a Pitch Slam in New York where I had three minutes to pitch my book to seven different agents. It was very scary and I'm glad I don't have to do it again.

Describe your writing day. Where do you write? How do you organize your time? Where do you look for inspiration?
Ideally, I wake up at 5 am on my days off and write for a solid three hours before The One-Year-Old requires my attention. This does not happen as often as it should. However, the One-Year-Old does nap and attend playgroups, which allows me to squeeze writing in.

Are there any tips you could give aspiring writers who are looking to get published?
Read. Write. Go to conferences. Enter writing contests. Make friends who write. Make friends who read. When you're watching television remind yourself you should be writing instead. Hire a good editor when you've done all the editing you can stand and you're ready for a professional opinion - she's worth it.

Can you describe three aspects of writing craft that have been most important as you've developed as an author?
Every time a story of mine improves it's because I've streamlined it. It's difficult, but cutting away the fat (even though fat is tasty!) makes for a better story. When whole characters have to be ejected, I mourn for them, but if a story is better without them, they must be DELETED.

I always force myself to write one sentence a day so I can go to sleep knowing I've made at least a little bit of progress on The Short Story or The Novel. The lucky effect of this self-imposed habit is that it's hard to sit down and write just one sentence! So most days, one sentence will turn into a whole paragraph, and sometimes whole chapters are blurted out in one go.

Which favourite authors would you invite to a dinner party? Which fictional character do you wish you'd invented?
If I'm trying to put together a dinner party with witty conversation between well-behaved guests, I would invite Kurt Vonnegut, Mark Twain, and Oscar Wilde. If I'm looking for a raucous, whiskey-drenched party where a discussion of poetry would likely conclude with a knife-fight, I'd want Hunter Thompson and Charles Bukowski at opposite ends of the table. If this party were to include children hoping to hear a good story, I'd invite Diana Wynne Jones and Eva Ibbotson. However, all the lovely authors I've just mentioned are dead.