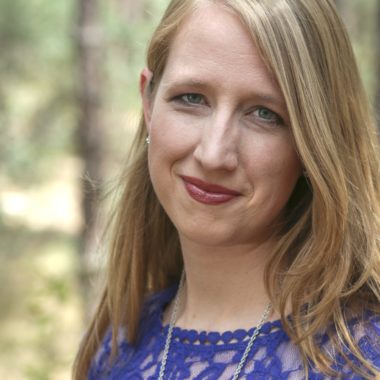 Joanna Meyer lives in Arizona and writes fantasy for teens.

Joanna is the author of the critically acclaimed Echo North, as well as the companion novel duology Beneath the Haunting Sea and Beyond the Shadowed Earth. She writes stories about fierce teens finding their place in the world, fighting to change their fate, save the ones they love, or carve out a path to redemption.

Joanna lives in Mesa, Arizona with her dear husband and son, a rascally feline, and an enormous grand piano named Prince Imrahil. As often as she can, she escapes the desert heat and heads north to the mountains, where the woods are always waiting.

Beyond the Shadowed Earth

Set in the same universe as Joanna’s debut, Beneath the Haunting Sea, this new novel combines her incredible world building and lush prose with a new, villainous lead.

Into the Heartless Wood

A beautifully written, mysterious and evocative novel from a fantasy author with a growing reputation in YA.

A mesmerizing and beautifully written fantasy novel by the author of BENEATH THE HAUNTING SEA, described by Kirkus as “epic, musical and tender.”

Beneath the Haunting Sea

I wrote my very first “book” at the age of seven, an illustrated adventure about four girls investigating a string of neighborhood pet-nappings. It began with the intriguing line: The four mystery-solvers walked down the road, and the villain was a guy in a gorilla suit. It was terrible and I didn’t finish it—but I never stopped writing! I entered a bunch of writing contests growing up, and was published in the children’s magazine Stone Soup when I was thirteen. I started seriously writing novels after graduating from college.

So many books impacted me! I loved mysteries when I was younger: BOBSEY TWINS and BOXCAR CHILDREN and a little later Trixie Belden (I read Nancy Drew too, but Trixie was my favorite! She was so plucky and seemed a lot more relatable.)
Brian Jacques’ REDWALL series was hugely inspiring: epic battles! dastardly villains! delicious feasts! warrior mice! I couldn’t get enough. I think REDWALL spurred my love of epic quests and fantasy adventure.

I adored Robin McKinley’s BEAUTY at ten or eleven—pretty sure it was the first book to make me cry. Gail Carson Levine’s ELLA ENCHANTED delighted me, and Sherwood Smith’s CROWN DUEL/ COURT DUEL were some of the first books I ever read from my library’s brand new Young Adult section (which was only a shelf or two, back then!). I still reread these books, and am pretty sure I could quote much of CROWN DUEL from memory (oh my, it’s so wonderful!).

And then of course there’s LORD OF THE RINGS, which I first read around the age of thirteen. I fell head over heels in love with it, and Éowyn and Samwise and Faramir (and everyone, really) remain some of my favorite characters of all time.

I wrote my first novel in fits and starts between college semesters, and it was a little over half done by the time I graduated. I’d never finished anything so long before, and didn’t know if I could actually pull it off. But then I stumbled upon the NaNoWriMo website, which lit a fire under me. The forums were locked and I couldn’t join yet, but I was so inspired, I finished my first novel over the summer, and then wrote an entire new one in November, during NaNoWriMo 2005.
I never finished revising my first novel (although I do want to one day!), but getting over the hump of finishing something was crucial in launching my writing career. Knowing I could finish one novel gave me the drive to keep writing more.

Signing with Sarah was a long and arduous journey! I sent my very first batch of queries out in late 2008, for a book I was then calling The Whale and the Tree. I continued to query through the summer of 2009, and although I did get a few requests, they didn’t amount to anything. In 2010, I wrote and revised another book, Seer, and queried that from about October 2010 through the end of 2011. I got a few requests, but again they didn’t amount to anything.

For about a year after that, I was very pleasantly distracted by falling in love with, getting engaged to, and marrying my amazing husband, but in late 2012 through the spring of 2013, I revised Seer again, and began querying the new version. I queried the whole rest of the year, and the rejections piled depressingly high. I did have some interest from an independent press, but it eventually fell through.

While I queried Seer, I was also rewriting The Whale and the Tree, pretty much from scratch. It took me over a year to finish, but I finally did, in August 2014. And then I began querying again.

I got more requests than I ever had before, but the majority of those turned right back into rejections. In December, I got a full request which, in March 2015, turned into an offer. I was astonished and absolutely over the moon, furiously emailing every other agent I’d queried to let them know about the offer—one of those agents was Sarah!

I ended up getting to choose between four amazing agents, which was dizzying and wonderful and completely crazy after so much rejection and heartache (and, let’s be honest, sobbing on the floor). Sarah was the last agent to offer, and I picked her because her vision for my book inspired me, and I knew she’d make me do the most work (which was oddly comforting)!

I think it’s funny that the book I first queried was the book that got me an agent… seven years later!

I teach piano lessons most afternoons, so I write mainly in the mornings. I like to write at my desk with a pot of tea at my elbow, and if I don't get interrupted, or distract myself on the interwebs, or have to do some irritating adult task like grocery shopping or laundry, I’ll work all the way till lunch. If there’s time, I’ll write after lunch as well, and sometimes between students in the afternoon. I’ll often camp out at a coffee shop instead of my desk at home—sometimes a change of scenery is necessary! It’s my theory that the longer you’re there, the less per-hour your ridiculously expensive beverage actually costs…

I find inspiration everywhere: in books and movies and nature, in conversations with friends, in odd observations about the world. Rainstorms and forests and sunsets inspire me, as do curious concepts or interesting questions that take an entire story to answer. If I get stuck in my writing, I’ll take a walk or read a book or just get out of the house for a while. Sometimes I do my best brainstorming when I’m taking a shower or driving home, or lying in bed at night—which inevitably backfires, causing me to scramble for my phone to jot down notes in the dark, and leaving my mind spinning for hours!

First of all, don’t give up. It might take a while, but if you’re committed to your craft and the process, it WILL happen for you. Just keep pushing and writing and dreaming, and you will get there!

Second, try not to put a time limit on yourself. Explore your writing and your worlds. Give them the time you need to let them grow. Don’t rush it. Steep yourself in story, and hone your craft.

Third, surround yourself with writing friends, and adopt a trusty critique partner or two! Not only will you learn things about your own writing by critiquing others’, but feedback from a consistent, trusted source is invaluable. It may take some trial and error to find someone who's critiquing style meshes with yours, but it’s well worth it!

Four, eyes on your own paper! Try not to compare your writing journey with someone else’s. It’s easy to let jealousy rear its ugly head, but it doesn’t accomplish anything. We’re all different, we’re all on our own path. Focus on your own unique journey.

Outlining is key. I wish I could fly by the seat of my pants and figure out the story as I go along, but every time I try it, it leads to disaster! I use a variation of Randy Ingermanson’s Snowflake Method, which helps me grow my ideas naturally, and culminates in a scene-by-scene outline that keeps me from writing myself into a corner.

Don’t force an idea. If it’s not ready, it’s not ready. I have to brainstorm and think and dwell with an idea for quite a while before I start writing it—it needs to gel properly in my subconscious. If I start it too soon, I’ll get frustrated at how little I understand the world and the story, struggling to write characters and settings that I can't properly see in my own mind… which inevitably leads to me stopping partway through and shelving the manuscript!

Less is more—in word choice, in characters, scenes, settings. If two or more scenes are essentially accomplishing the same thing, I’ll cut the superfluous scenes, or combine them all into one. If those pretty sentences I’m so attached to aren’t adding to the story, I gotta cut them, too! I’m continually learning that every word has to earn its keep. This leads to a tighter, better manuscript overall.

I would invite Tolkien, Jane Austen, and Megan Whalen Turner (author of the QUEEN’S THIEF series) to dinner. A weird mix, but it’d be wildly entertaining.

I wish I would have invented Eugenides, from the aforementioned QUEEN’S THIEF series (I love him so!), and also Kestrel and Arin from Marie Rutkoski’s WINNER’S trilogy.