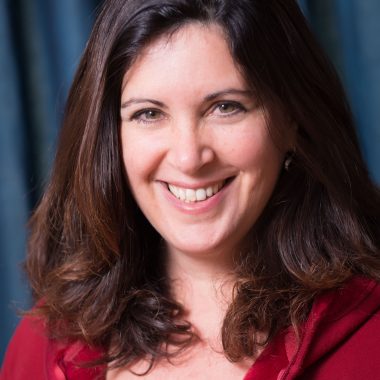 Ronni Arno is a communications specialist and the author of several younger MG novels. She lives in Maine.

Ronni Arno is the author of RUBY REINVENTED and DEAR POPPY, both published by Aladdin. MOLLY IN THE MIDDLE is coming soon. She lives in Maine with her family.

Molly in the Middle

A girl finds herself in the middle of a big decision—follow the crowd or follow her heart—in this hilarious M!X novel.

When Poppy moves to the country, she discovers a secret stash of letters that give her a unique connection to her late mother in this novel about friendship, first crushes, and family drama.

I've been writing for as long as I can remember. I've always kept diaries and journals, I loved writing stories as a kid, and I even wrote cheesy romantic poetry when I was a cheesy romantic teenager.

I adored the Dr. Suess books when I was younger. As I got a little older, I read every Judy Blume book ever written, and I loved the Nancy Drew books. The first book that made a huge impact on me in high school was THE CATCHER IN THE RYE. I still have my original copy. I could read that book over and over and learn something new about Holden Caulfield each time.

Who were your childhood storytelling heroes?

I started college as a Creative Writing major, but decided after my Freshman year that it wasn't a practical major for the 'real world,' so I switched to Communications. I got plenty of jobs and enjoyed them, but something was always missing.

About two years ago I told my husband that I wanted to write a book, and he told me I should. I then spent half an hour trying to convince him that it was a crazy idea, because didn't he know how hard it was to actually get published? He told me it would be impossible to actually get published if I didn't actually write the book. And, since he's a wise man, I figured I'd better take his advice and write the book.

The first book I wrote was a middle-grade fantasy that was a ton of fun to write. I queried it, got some requests, but ultimately realized that, while it had some potential, it wasn't the right book. The experience was invaluable, though. I learned so much about the writing process. The next book I wrote was RUBY REINVENTED. I entered it into some Twitter contests before querying, and I was thrilled to receive requests. That gave me the confidence to query my dream agents. Sarah Davies was the number one agent on my list, and I crossed my fingers extra hard when I sent my query to her on January 17. I was absolutely thrilled when she asked for the full on January 20. On January 24, she asked if we could speak, and she offered representation on January 27. I said yes immediately, even though the manuscript was still out with other agents. I just had a gut feeling that she was the one! I am eternally grateful that she pulled me out of the slush pile. She is truly amazing.

I don't have one particular writing spot. Sometimes I write on my couch (very glamorous!), sometimes I write at my desk, and, when weather permits, I write outside. One of my favorite writing spots is the public library in Camden, Maine. It looks out onto the harbor and it has such a good vibe... the words always flow when I'm there.

Inspiration comes from many different places. Much of the time it comes from stalking... I mean spying on... I mean listening to my kids talk with their friends. Sometimes it comes when I'm out for a walk with my dog, and often it comes while I'm in the shower!

Read. A lot. And then write. A lot. And after you've done a lot of reading and writing, find a critique group. It's amazing how much a good critique group can improve your writing. I was lucky enough to get in with a fantastic group that I met on Twitter. So join Twitter! The writing community there is so generous and supportive. Conferences and organizations like SCBWI are incredibly helpful as well.

1) Listen to your gut. One of my favorite quotes about writing comes from Ray Bradbury. "Your intuition knows what to write, so get out of the way." Much of what I write comes from instinct. As I write freely, I find the storyline and the characters often take on lives of their own. They tell me where to go and I follow.

2) Know your characters. Develop backstory for your characters. Know their birthdays, their favorite colors, and their middle names. Imagine their greatest fears, their biggest triumphs, and, most importantly, what your characters wants more than anything else in the world. Notice the colored flecks in their eyes, the streaks in their hair, and the way they stand. Be able to answer any question about your characters as if you were answering them about yourself. Of course you don't need to put all this information into your manuscript... but be familiar with it all! It will help bring your characters to life.

3) Plan your plot, but be flexible. I'm not much of an outliner, but I do have a good idea of where my plot is headed. That said, sometimes it's okay to get off track. You never know if that train is going to take you to a better destination than the one you had planned.

My favorite authors are the writers in my critique group. I'd make them my almond-kale salad (not as yucky as it sounds), giant stuffed burritos (because everybody loves burritos), and then serve a Carvel ice cream cake for dessert (shaped like a book, of course). I'd invite these authors over because they are the most generous and heartwarming writers I've ever met and they deserve ice cream cake.

Which fictional character do you wish you'd invented?

Every time I fall in love with a book I wish I'd invented a character from it. Some favorites include Ron Weasley (for his sense of humor), Peeta Mellark (for his decency), and Lola from CHARLIE & LOLA (for her sass).