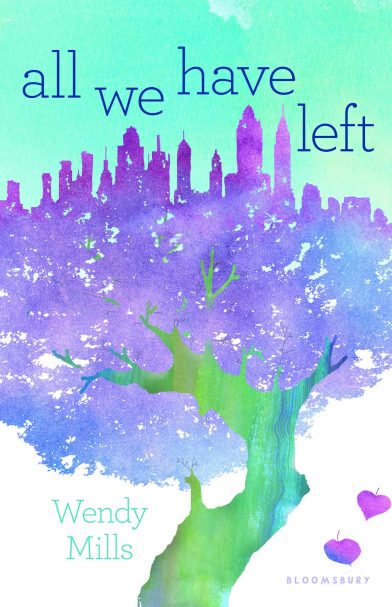 All We Have Left

A story of past and present, heartbreak and hope, as two girls find the courage to be the people they want to be, and learn that both hate and love reverberate into the future and beyond.

Sixteen-year-old Jesse McLaurin never wondered what her brother John was doing inside the World Trade Center on the day he died. Her father made it very clear he did not want to talk about 9/11, and really, what did it have to do with her? But as the fifteenth anniversary of 9/11 nears, Jesse’s father becomes more vocal against the Muslims he blames for killing his son, and Jesse feels increasingly adrift. She falls for dangerous, edgy Nick, but when he eggs her into painting “Towel Heads Go Home” on the wall of an Islam Peace Center, and then leaves her to take the blame, Jesse begins to understand that the rage and secrets from that terrible day are tearing her family apart.
On the morning of September 11, 2001, Aalia Susanto dons the Muslim head scarf for the first time, hoping it will give her the strength to be the better person she so desperately wants to be. At the World Trade Center, she meets handsome, broken John McLaurin, and as the planes collide into the towers, the two teenagers fight for their lives in a world gone mad. Inside the crowded, smoky stairwells, Aalia witnesses bravery and basic human kindness that transcends the horrifying acts of the nineteen terrorists. As the flames rage, Aalia finds a deep well of strength and learns that she is stronger than she ever could have imagined.

Jesse starts her community service at the Islam Peace Center she defaced and meets Adam Ayoub, a Muslim boy struggling with his own questions about identity in a country that seems determined to hate him. The two teenagers find common ground in their shared love of climbing and their feelings grow despite the many obstacles against them. As Jesse learns more about what her brother was doing in the Twin Towers on the day he died, she uncovers secrets that her father would prefer remain buried with her brother. When her father learns that Jesse is seeing Adam, Jesse must face questions about what kind of person she wants to be, and what she will stand up for.

ALL WE HAVE LEFT is the parallel story of Jesse and Aalia, in a story of past and present, heartbreak and hope, as the two girls find the courage to be the people they want to be, and learn that both hate and love reverberate into the future and beyond.

Winner of the YA category of the Florida Book Awards 2016

Chosen by the Nerdy Bookclub for their teen book awards: “All We Have Left is a book we won’t want to assign to a time period, but recognize for its timeless presentation of bringing hope and healing via quality young adult literature.”

Amazon Best Book of the Month

Amazon has selected ALL WE HAVE LEFT as a best book of the month for August 2016!

“This outstanding, touching look at a national tragedy promotes healing and understanding and belongs in every library.”

“Both a poignant contemplation on 9/11 and a necessary intervention in this current political climate.”