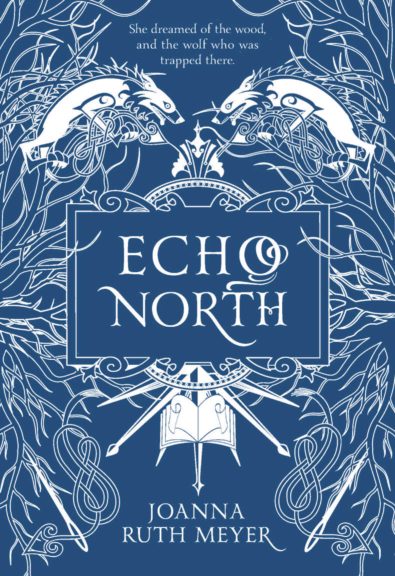 A mesmerizing and beautifully written fantasy novel by the author of BENEATH THE HAUNTING SEA, described by Kirkus as "epic, musical and tender."

Echo Alkaev’s safe and carefully structured world falls apart when her father leaves for the city and mysteriously disappears. Believing he is lost forever, Echo is shocked to find him half-frozen in the winter forest six months later, guarded by a strange talking wolf — the same creature who attacked and scarred her as a child. To save her father, Echo agrees to the wolf’s ultimatum—to live with him for one year. But there’s more to the wolf than she realizes.

In his enchanted house beneath a mountain, something new, dark, and strange lies behind every door. Within these halls, Echo discovers centuries-old secrets, a magical library full of books-turned-mirrors, and a young man named Hal who is trapped inside of them. As the year ticks by, the rooms begin to disappear and Echo must solve the mystery of the wolf’s enchantment before her time is up — otherwise Echo, the wolf, and Hal will be lost forever.

“Meyer (Beneath the Haunting Sea) refreshes the familiar framework with additional fairy tale elements—“Cupid and Psyche,” “Beauty and the Beast,” and “Tam Lin” among them—producing a compelling, satisfying romantic adventure with metafictional undertones.”

“Epic and engrossing. Magic pulsates through every page; every landscape in this alternate Siberia lives and breathes … Readers will ache when it’s over and want to start all over again … A lush, captivating new twist on beloved fairy tales.”