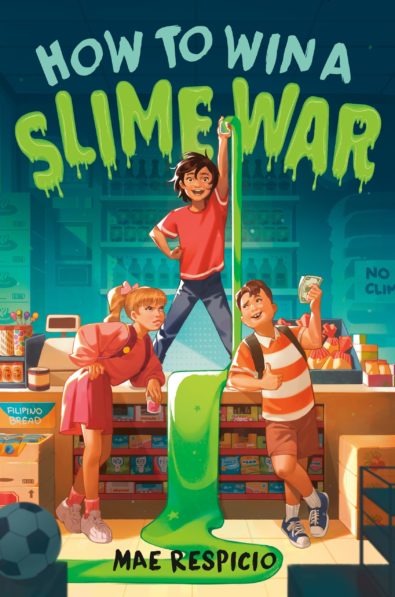 How to Win a Slime War

Two kids face off in an epic battle to see who can sell the most slime, while navigating sticky situations with friends and family.

Alex Manalo and his dad have just moved back to Sacramento to help out with their extended family’s struggling Filipino market. While Alex likes helping in the store, his true passion is making slime! He comes up with his own recipes and plays with ingredients, colors, and different bumpy or sparkly bits, which make his slime truly special. A new friend encourages Alex to sell his creations at school, which leads to a sell-off battle with a girl who previously had a slime-opoly. Winner gets bragging rights and the right to be the only slime game in town.

But Alex’s dad thinks Alex should be focused more on “traditional” boy pastimes and less on slime. As the new soccer coach, Dad gets Alex to join the team. Even though he hates sports, Alex gives in.

Alex is battling on multiple fronts–with his new friends at school, and with his dad at home. It will be a sticky race to the finish to see who oozes out on top.

Mae Respicio is a Filipina-American writer. Her charming, thought-provoking middle-grade  debut, A HOUSE LIKE THIS, was preempted by Wendy Lamb at her eponymous Random House imprint.

She is a former PEN Emerging Voices Fellow and author of Images of America: Filipinos in Los Angeles (Arcadia Publishing).  She has previously been published in The Bigger the Better the Tighter the Sweater: 21 Funny Women on Beauty, Body Image, and Other Hazards of Being Female (Seal Press) and she completed a writing residency at the Atlantic Center for the Arts.  Mae  was also a longtime administrator for an established writing program at UCLA, where she was fortunate to build many connections with authors.