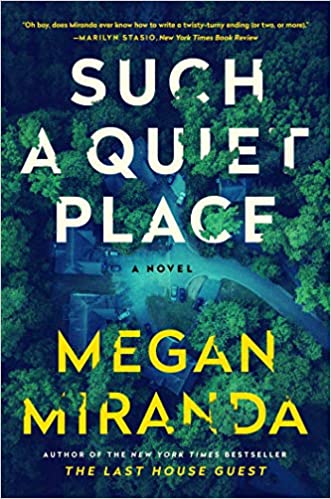 Such a Quiet Place

From the New York Times bestselling author of The Last House Guest—a Reese Witherspoon Book Club selection—comes a new riveting suspense novel about a mysterious murder in an idyllic and close-knit neighborhood.

Welcome to Hollow’s Edge. A private and idyllic neighborhood, one where neighbors know each other, celebrate graduation and holiday parties together, and look out for one another. But after the sudden deaths of Brandon and Fiona Truett, there’s another version of Hollow’s Edge, simmering underneath. One where everyone is trapped with each other, suffocated by their trial testimonies, their versions of the facts. And now, the woman they put away for the crime is back.

A year earlier, Ruby Fletcher was convicted of killing Brandon and Fiona Truett by carbon monoxide poisoning. Neighbors had testified, calling her a grifter, a thief, a sociopath. Now, with her conviction overturned, Ruby is back at Hollow’s Edge as if nothing has happened. When she waltzes into the home where she once lived with Harper Nash, Harper is shocked. And afraid. What does Ruby want? And more importantly, why would she possibly return to a place filled with the people who accused her?

As Ruby’s return reminds the community of the initial crime, the neighborhood reinstates nightly watches. Vigilant or afraid? Everyone wants to know why Ruby would come back. If it’s for revenge, who is the target? If Ruby is innocent, like she claims, then a killer has been living with them, all along. Soon terrified neighbors turn on each other once more. And it becomes clear that not everyone told the truth about that night. When Harper begins receiving threatening, anonymous notes, she knows she must uncover the truth before someone else – maybe even Harper herself – gets hurt.

Filled with the signature shocking twists that are Megan Miranda’s trademark, Such a Quiet Place is Megan Miranda’s best novel yet– a twisty and nearly locked-box thriller that will keep you turning pages late into the night.

Apple’s Most Anticipated Books of Summer 2021