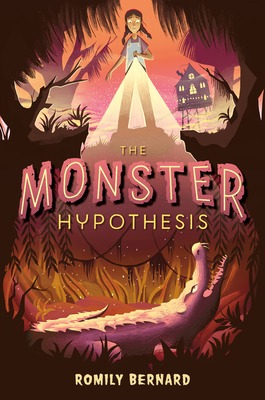 A fast-paced mystery filled with humor and scientific intrigue, set in a perfectly eerie Southern town.

Welcome to Bohring-home to 453 people, 2,053 alligators, and one monster curse.
Correction: home to 454 people, now that Kick Winter is living in the swamp Hollows with her Grandma Missouri, the town (fake) psychic. Bohring is anything but boring for Kick who has already blown a hole through the kitchen floor, befriended a chicken-eating gator, and discovered that the town’s hundred-year curse is upon them.
It’s the Bohring curse and all the kids are about to become monsters-or so the legend goes. People are worried-except for Kick. She knows there’s a scientific explanation for everything, especially curses and monsters. But Kick is the new kid in school and she’s determined to make a name for herself . . . by pretending to be psychic.
According to her calculations: one teeny-tiny life + (fake) psychic skills = popularity. But when kids start disappearing and glowing creatures start showing up, Kick’s theory quickly evaporates in a puff of foul-smelling swamp gas. Can Kick use her (real) science smarts to prove the curse is a hoax? Or is it just-maybe-sort of-somehow possible the curse is here?