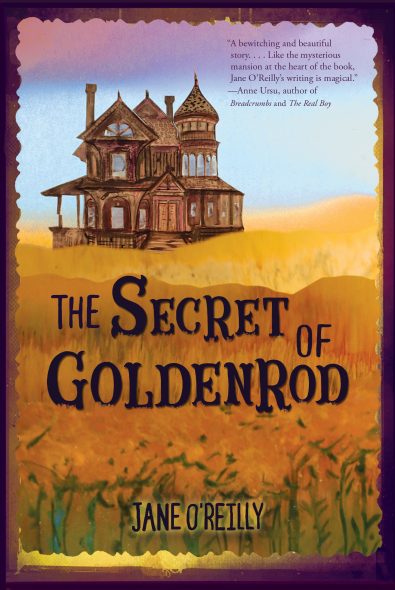 The Secret of Goldenrod

For 11-year-old Trina, home is wherever her father’s work as a master carpenter takes them. She’s always rolled with the punches, wielding a hammer with ease, but now she longs for the mother who abandoned them, and a place to call home. Now she wants the “someday” of her mother’s occasional postcards to be become reality.
Trina and her father’s latest project is Goldenrod, an abandoned wreck of a mansion in the middle of an Iowa cornfield. Although the contract gives them a year to complete the remodeling, and a chance to put down roots, living in Goldenrod comes with a host of problems. The town is miles away, a mean girl dominates fifth-grade, and everyone Trina encounters thinks Goldenrod is haunted. Which it may well be, given the mysterious laughter, the ball that rolls out of nowhere, the strange creakings in the night.

But that part about the haunted house depends on your point of view. Augustine, three inches of sassy, jointed porcelain, is an antique French doll who was left behind when the house was boarded up a century ago, and she’s got her own ideas on the situation. But for Trina it seems like Goldenrod is trying to tell her something – that maybe it has a secret to share. But what could a forgotten old mansion want to tell Trina about her life and what matters most?

“This wistful and superlative coming-of-age story highlights the discovery of friendship and belonging in an otherwise chaotic world. Perfect for readers who crave contemporary stories that feel like a classic, this is one to be re-read and enjoyed many times over.”

“O’Reilly’s multilayered story is superbly presented. Loss, acceptance, coming together to accomplish goals, facing fears, and overcoming rejection are all bathed in the golden light that is the richness of living. This solid middle-grade book shines with wisdom and compassion.”