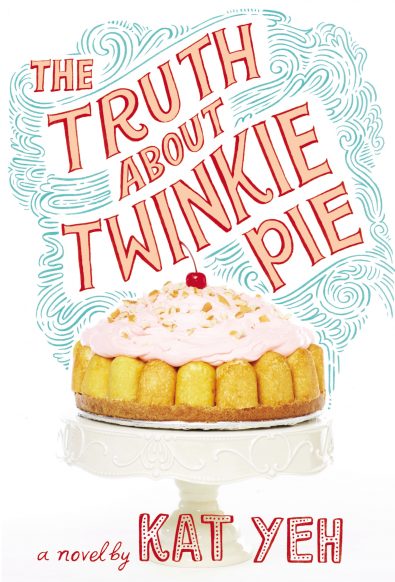 The Truth About Twinkie Pie

Touching and smart, poignant and funny, this is classic middle grade to delight the heart

Mix in a fancy new school, a first crush, and a generous serving of delicious food.

Then top it all off with a supposedly dead Mama and her very special lipstick.

Here’s the recipe for THE TRUTH ABOUT TWINKIE PIE, the story of what happens when GiGi and DiDi say goodbye to their home in the South, leaving everything behind — except their dead Mama’s cookbook of trailer park recipes, all laced with homespun wisdom and loving care. After all, recipes play a big part in the sisters’ lives. DiDi has even given GiGi a Recipe for Success that is sure to head her straight for an Ivy League education, and nothing – not even their secret $1 million win in a cooking competition – is going to deflect from GiGi’s academic journey to the stars.

But GiGi figures that in her new home, in this utterly different world of privilege, it’s time to try her own recipes. Like how to make good friends as easily as she makes good grades. Like how to Tell It Like It Is, instead of always pretending. Maybe even how to turn her boy friend, Trip, into A Boyfriend. And especially, how to find a tube of Mama’s favorite lipstick, Revlon’s Cherries in the Snow – discontinued now for twenty years.

GiGi’s always known that she walked in her Mama’s smart and beautiful footsteps – that she was given the name of an astronomer for some big reason. But now, as she seeks to reinvent herself, GiGi stumbles upon a clue that could change everything. Suppose her dead Mama wasn’t so dead after all. Suppose she had to reinvent herself from a basketful of mystery ingredients?

More than anything, this is a story about growing up, discovering who you really are – and what to make from what life has given you.

Awarded a star for Outstanding Merit in Bank’s Street’s round-up of best books in the 9-12 category.

A great accolade to be named to this prestigious reading list for the Lone Star State!