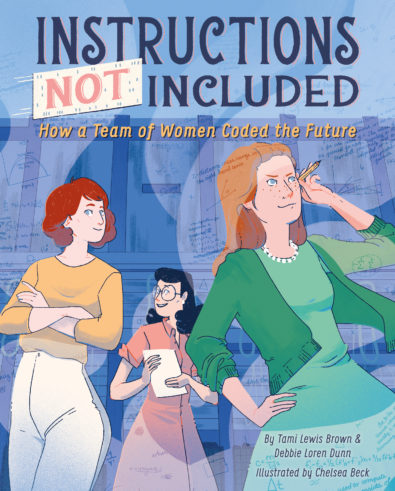 Instructions Not Included: How Three Women Coded the Future

A fascinating picture book about the women who helped to shape the early days of computing - and changed the world forever. Illustrated by Chelsea Beck.

Common wisdom suggests computers are an exclusively male domain– ironic when one considers that women invented computer programming. INSTRUCTIONS NOT INCLUDED tells the story of a team of forgotten women innovators,  Jean (Jennings) Bartik, Kay (McNulty) Mauchly and Betty (Snyder) Holberton, women who hacked the first electronic computers (before hacking was a thing) to win the war and change the world. They knew computers must be small, nimble and communicate with each other, just like they did. This book doesn’t just give these pioneers their due. It demonstrates how the team’s “feminine” attributes– cooperation, communication and teamwork– formed the essence of how modern computers function.

The manuscript also includes an Authors’ Note, giving more information about the three women; a section of Other Resources (books, films, and coding for beginners);  and photographic images which could lend an additional weight to the storyline.

A joint project of the National Science Teachers Association (NSTA) and the CBC since 1973, Outstanding Science Trade Books for Students K-12 represents the year’s best books for science classrooms, chosen by science educators.