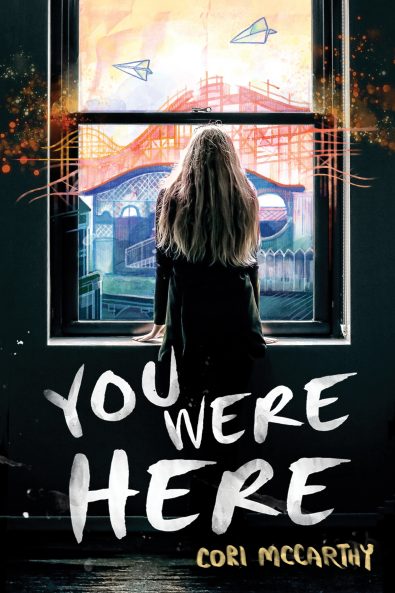 Cori's third book, YOU WERE HERE, is a contemporary mixed media novel including word art poetry and graphic novel sections. The novel earned starred reviews from the Bulletin for the Center of Children’s Books and VOYA, and it was selected for the Texas Library Association's 2017 Reading List (Tayshas).

Jaycee is about to accomplish what her older brother Jake couldn’t: live past graduation.

Jaycee is dealing with her brother’s death the only way she can – by re-creating Jake’s daredevil stunts. The ones that got him killed. She’s not crazy, okay? She just doesn’t have a whole lot of respect for staying alive.

Jaycee doesn’t expect to have help on her insane quest to remember Jake. But she’s joined by a group of unlikely friends – all with their own reasons for completing the dares and their own brand of dysfunction: the uptight, ex-best friend, the heartbroken poet, the slacker with Peter Pan syndrome, and… Mik. He doesn’t talk, but somehow still challenges Jayce to do the unthinkable-reveal the parts of herself that she buried with her brother.

Cori McCarthy’s gripping narrative defies expectation, moving seamlessly from prose to graphic novel panels and word art poetry. From the petrifying ruins of an insane asylum to the skeletal remains of the world’s largest amusement park, YOU WERE HERE takes you on an unforgettable journey of friendship, heartbreak, and inevitable change.