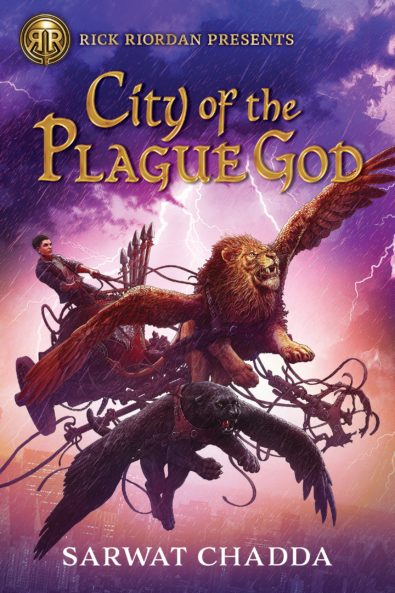 City of the Plague God

A thrilling and action-packed fantasy based on Mesopotamian mythology; a brilliant addition to Rick Riordan's personally selected and bestselling imprint.

Thirteen year-old Sikander ‘Sik’ Aziz has a frantically busy life working in his parents’ deli in Manhattan after school and on weekends. Sure, he misses game night with his friends, and he wishes Daoud, a vain aspiring actor who is supposed to be an employee, would pull his weight. But Sik is dedicated to keeping his immigrant parents’ American dream alive. After all, there’s no one else they can count on now that their eldest son, Mo, is gone.

Mo loved Iraq, where he was born, and taught Sik all about ancient Mesopotamia and its mythology. As young boys they played at being Gilgamesh, the greatest hero of all time, and Enkidu, his trusty sidekick, battling make-believe monsters till dinner-time. All this role-playing becomes painfully real when Nergal, the ancient god of disease, crashes into his life. Nergal is seeking a treasure he thinks Sik’s brother stole from Iraq, and if he doesn’t get it he will unleash a supernatural plague across New York City, transforming its inhabitants into monsters.

Sik must fight demons, join forces with the goddess Ishtar and her adopted daughter, and venture into the netherworld to save the people he loves, making heart-breaking sacrifices along the way. He must become a hero in his own right or the city is doomed. But is that even possible for someone like him?

Praise for CITY OF THE PLAGUE GOD:

“There will be tears and snarky jokes. I can also guarantee you will not want the adventure to end. I know I didn’t!” ―Rick Riordan, #1 New York Times bestselling author of Percy Jackson and the Olympians series

“City of the Plague God is not to be missed. It shines with comedy, drips with menace, and oozes with authenticity. Another outrageously readable winner from Rick Riordan Presents.” ―Eoin Colfer, internationally bestselling author of the Artemis Fowl series

“Bold, brave, and full of surprises! I couldn’t stop turning the pages. Chadda balances an action-packed story with his trademark humor and a deft handling of Sik’s immigrant identity that feels relevant and important in today’s world.” ―Natasha Ngan, author of the New York Times bestselling Girls of Paper and Fire series