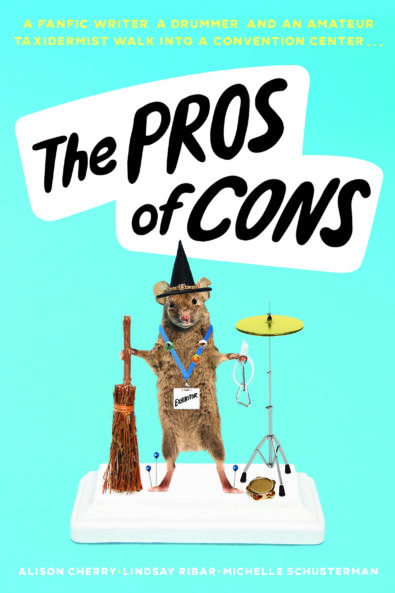 The Pros of Cons

Co-authored with Alison Cherry and Lindsay Ribar, this is an entertaining and sometimes slapstick testament to the power of friendship

Drummer Phoebe Byrd prides herself on being one of the guys, and she’s ready to prove it by kicking all their butts in the snare solo competition at the Indoor Percussion Association Convention.

Writer Vanessa Montoya-O’Callaghan has been looking forward to the WTFcon for months. Not just because of the panels and fanfiction readings but because WTFcon is where she’ll finally meet Soleil, her internet girlfriend, for the first time.

Taxidermy assistant Callie Buchannan might be good at scooping brains out of deer skulls, but that doesn’t mean it’s her passion. Since her parents’ divorce, her taxidermist father only cares about his work, and assisting him at the World Taxidermy and Fish-Carving Championships is the only way Callie knows to connect with him.

When a crazy mix-up in the hotel lobby brings the three girls together, they form an unlikely friendship against a chaotic background of cosplay, competition, and carcasses!

“Working seamlessly in alternating POV chapters, Cherry, Ribar, and Schusterman deliver a laugh-out-loud romp that finds humor and drama in three very different fields of interest. As the story lines converge, readers will delight in seeing these passionate girls recognize that it’s okay to want things and to screw up, and that sometimes you make unexpected friends in the process.”